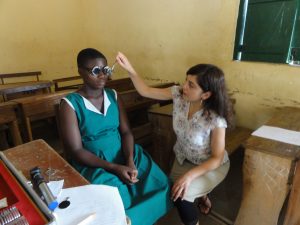 From the July 10th to August 1st of 2011, Esma was sent to Ghana on behalf of The Optical Foundation to continue the Glasshopper project. Esma is a Dutch orthoptist and lecturer at the University of Utrecht.

During the period Esma was in Ghana we appointed Dr Godwin Ovenseri-Ogbomo as a project coordinator, to start the necessary preparations on the ground in Ghana. Dr Godwin Ovenseri-Ogbomo is an optometrist and lecturer at the University of Cape Coast. In 2007 and 2008 he helped Carolina to establish The Optical Foundation’s Glasshopper project. Carolina and Godwin published the results of these screenings in a Dutch Optometry Journal. 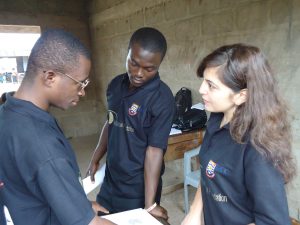 The program during Esma’s stay in Ghana was as follows: Monday to Friday Esma, Godwin and the Ghanaian optometry students (varying anywhere between 6 to 13 students per day) would visit elementary schools and/or an orphanage to perform eye exams on the children. The Ghanaian students obtained practical experience, while at the same time eye test where being performed on children, who if need be would get glasses. The lenses would usually be ordered in Accra and the university technician would mount the lenses into the frames. All this allowing The Optical Foundation to contribute to one of its objective of stimulating the local economy in Ghana.

Esma and her team had worked extremely hard conducted screenings at the St. Lawrence Catholic school, Abura Ahmadiyya School and the New Life International Orphange. In total Esma and her team had screened a total of 470 children, of which 25 children and four teachers were prescribed prescription glasses. Following is an excerpt from the Esma’s report dated Friday, July 15th, 2011, of the findings at St. Lawrence Catholic School: 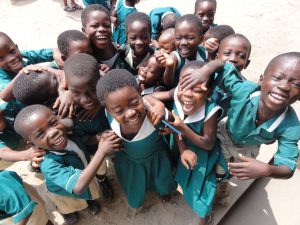 “15th of July 2011, St Lawrence Catholic School Today we saw a child with strabismus. This was very interesting for the optometry students. Due to the severity of the abnormal ocular alignment, I took some photos of his eyes. Based on the light reflex I could show the students the misaligned eye. It would have probably been a very funny sight, seeing us all huddled around the camera. I suspected an accommodative strabismus and immediately took the opportunity to incorporate a quick lesson on this subject.”

It was a busy day, we screened lots of children again and had those requiring prescription glasses, choose a frame they really liked. Even some children, who don’t require glasses, would come by to say that they also wanted spectacles.” 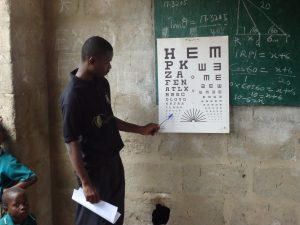 In addition to performing screenings, The Optical Foundation also aims to contribute to the theoretical education by providing guest lectures at the University. On July 22nd, Esma gave a guest orthoptics lecture on light reflex, cover test and amblyopia, followed by a practical lesson. Esma’s comments about the teaching;

“The students were very eager to learn and in wanting to know everything about the orthoptic disorders, their questions were almost endless. Very nice!”

Esma’s stay in Ghana coincided with the holiday period at the University, however all the optometry students voluntarily stayed on campus to help with the Glasshopper project. 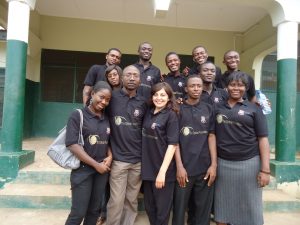 This indicates the enormous enthusiasm of the students in wanting to become specialists in their own country and to contribute to the improvement of eye care in Ghana. After taking part in the 3 weeks of screenings, each student that participated, received a certificate with the number of days they had worked for The Optical Foundation. This is not only a display of our appreciation, but it also reflects well on them providing them with opportunities for their future careers. In addition, it is most likely that two students from this enthusiastic group will become project coordinators of the next The Optical Foundation project.